About the Power of Attorney Project

Spanish conquerors brought their laws to the Americas.  Over the next three hundred years, indigenous peoples put the law to work for their own ends, and in certain ways, made it their own.  This legal system – and its attendant culture – helped a culturally diverse and geographically immense empire to cohere.  “Power of Attorney,” an on-going long-term digital research project, analyzes and expresses the history of native people’s engagement with Mexico’s colonial and post-independence legal systems by digitally mapping and visualizing social networks and flows of knowledge and power created by legal procedures and litigation.  Through analysis of relationships among people, places, and courts created by a common legal procedure – the granting of power of attorney – “Power of Attorney” contributes to a growing body of interdisciplinary scholarship that challenges the stubborn idea that native people were isolated from the law by geography, language, and cultural difference, and interacted with the law primarily as victims of colonial and post-colonial domination. 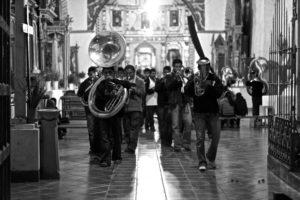 Historians and anthropologists have shown us that from the Spanish conquest of Mexico forward, indigenous people litigated actively and frequently over land, the exploitation of their labor, and communal rights and identities.[1]  The legal system provided the primary means through which they negotiated their place in society, shaped colonial subjecthood, and after independence, the meanings of citizenship.  In the process, the law became insinuated into the fabric of everyday life, so much so that legal and notarial practices dating back to the colonial period are considered “customary” in some native communities today.  Although we know about the importance of native litigation in shaping native communities and the colonial and national states of which they formed a part, we know little about the relationships that native people generated through the process of granting and enacting the power of legal representation.

“Power of Attorney” asks how native people used power of attorney to bridge geographical and cultural distance between themselves and legal institutions.  By connecting the communities of origin of native litigants and the location of their legal agents, the maps represent the social and spatial networks created by indigenous litigation; how and where legal knowledge circulated; and how these networks changed over time.  The maps also allow us to analyze additional variables such as the ethno-linguistic identities of the native individuals and communities that granted and received power of attorney, the populations of the granting communities and the communities where legal agents resided, and the communities’ administrative status.

“Power of Attorney” analyzes the relationship between legal representation and the exercise of local power in the area that today constitutes the southern Mexican state of Oaxaca, the country’s most indigenous and linguistically diverse region. Oaxaca’s two largest, predominantly indigenous, and multilingual jurisdictions — Villa Alta and Teposcolula – provide the setting for “Power of Attorney.” Villa Alta’s remote and rugged mountain setting and its long, drawn-out process of conquest and Dominican evangelization meant that Spanish institutions took hold at a slower pace than they did in Teposcolula, which was closer to central Mexico, and where native people interacted more fully with Spanish missionary friars, merchants, and administrators.  These places were therefore quite different, and moreover, within the boundaries of each jurisdiction, significant regional and linguistic differences prevailed. Comparing the two districts puts into relief how geography, linguistic difference, and proximity to Spanish officials and institutions mattered in the making of networks of power and knowledge through law.