By expressing relationships forged by power of attorney spatially, we get a bird’s eye view of flows of power, knowledge, and resources among native villages, legal professionals, and legal institutions.  Indigenous people gave power of attorney to legal agents in their own communities, larger Indian towns that were parish seats, the district seat of Villa Alta, the diocesan seat in Antequera/Oaxaca, the viceregal capital of Mexico City, and the court of the Spanish king in Madrid.  Power of attorney allowed native people to engage in legal activity across wide expanses of space, which shaped colonial history in two broad ways.  The first was that indigenous people could access the law to pursue local objectives, such as to host regional markets, claim a parcel of land that bordered a neighboring village, or achieve status as a parish seat; in short, they used Spanish courts and laws to their individual or collective advantage.  The second effect of power of attorney was to incorporate native people into the institutional machinery of the empire, culturally, politically, and economically.  As our eyes follow the lines that trace the relationships made by power of attorney, we can imagine the complex flows of power back and forth between native communities and legal institutions beyond them. Legal agency flowed from native municipal officers to legal entrepreneurs and professionals in colonial courts, and the material resources of native communities flowed to legal agents as they paid for their legal services.  At the same time, benefits could accrue to native litigants should their litigation succeed; but each victory in court was accompanied by a loss, often on the part of another native community. 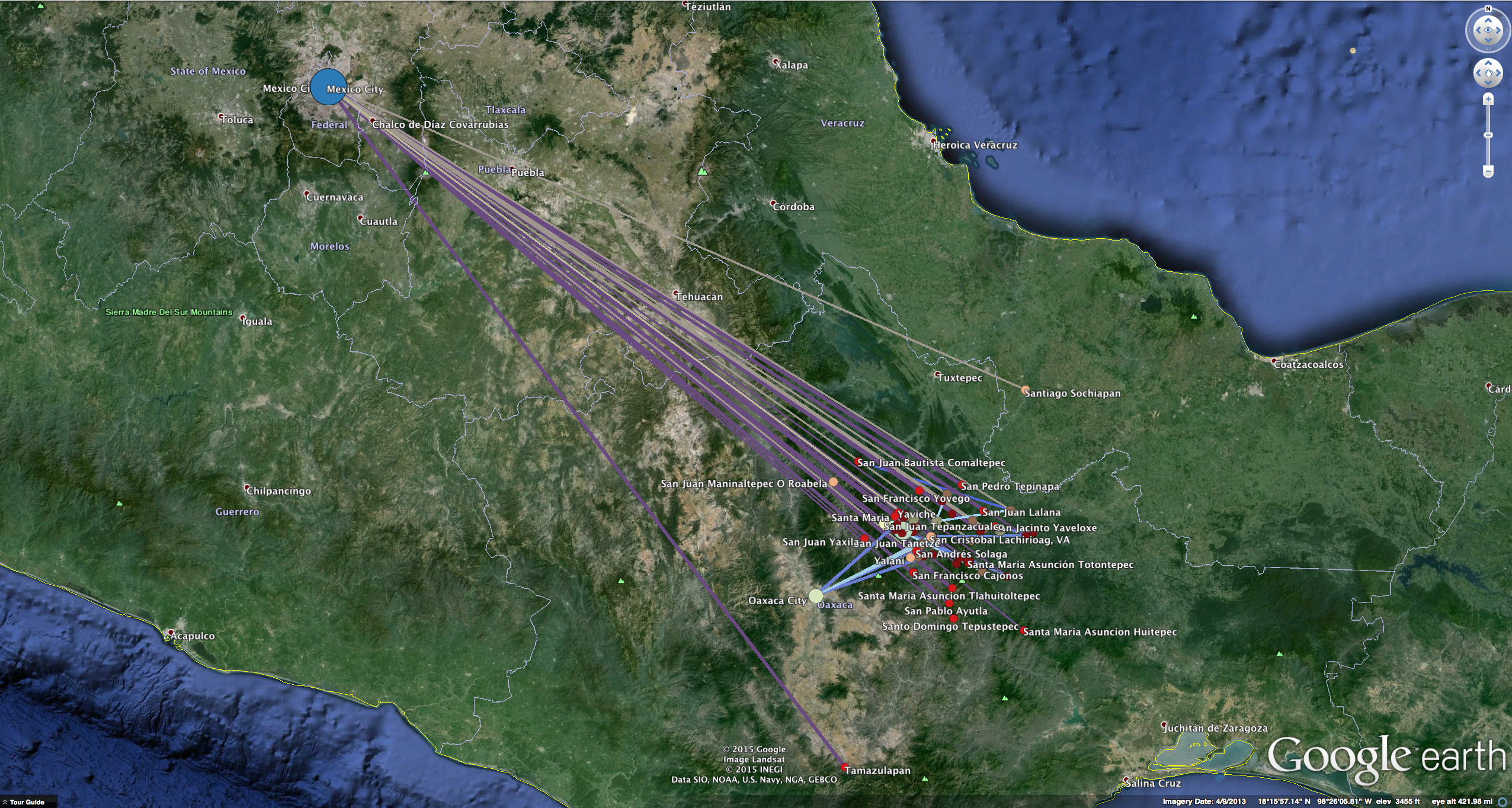 Google Earth shows us these flows and connections at a variety of scales, communicating an important story about the relationship between geography and legal activity.  [In order to interact with the Google earth maps, download Google earth by clicking on the button beneath the static Google earth map.  Next, download the three KMZ’s by clicking on the three buttons to the left of the “Download Google earth” button].  If we zoom into the Villa Alta district for any of the three chronological periods, we see a dense cluster of Indian municipalities (approximately 100 during the colonial period).  The towns are color-coded to indicate the degree to which power of attorney was generated or received in the town (refer to the “Grantor-Grantee” key).  Oaxaca City, Mexico City, and Madrid are also color-coded according to the key.  Most of Villa Alta’s native towns have occupied the same location since the eighteenth century.  A few communities disappeared later in the colonial period due to depopulation brought on by epidemic disease, or through the merging of two villages into one.  The continuity of settlement and the absence of geographically accurate historical maps led us to use present-day locations as stand-ins for historical ones.

When we zoom in further, we see lines that indicate the contractual relationships produced by the municipal governments of Indian towns as they granted power of attorney to native legal agents in other towns.  The distances between the towns – and critically, between the towns and the district seat of Villa Alta — do not appear great, but zooming in again, and looking beyond the lines, we are confronted by the rugged landscape of the region: steep mountain chains cross-cut narrow gorges carved by the Cajonos River. Imagine traversing that landscape on foot — the mode of transportation used by most, since mules were valuable commodities available to only a few — just to get to the court in the district seat of Villa Alta.  Modern-day residents of the towns located in what is known as the “Zapotec Corner (Rincón Zapoteco) tell tales of walking 12 hours over a mountain named “man killer” to the court of Villa Alta – the “local” court — to get married.

Now, imagine the journey from the Villa Alta district to Mexico City.  When we zoom out in the Google earth map, we see the great distances and formidable geography marked by mountains and narrow canyons.  Although native litigants made the journey to Villa Alta or Oaxaca City to engage in legal or notarial business themselves, few could afford the time away from their crops and livestock or the money required for lodging and food along the way to and from Mexico City, not to mention while waiting for the slow wheels of the legal machinery to turn.  Some native legal agents took up residence in Mexico City for one to two years while conducting legal business, an expense covered by a head-tax for litigation paid by each household in the community.  Zooming out beyond the American continent, the lines connecting Villa Alta with Madrid demonstrate that this remote and rugged southern Mexican region had transatlantic ties with Spain.  By exploring distance and geography in Google earth, it becomes apparent that power of attorney played an important role in bridging the spatial, geographical, and cultural gap between highland indigenous villages and urban administrative centers.  It made the colonial legal system run, and facilitated native participation. 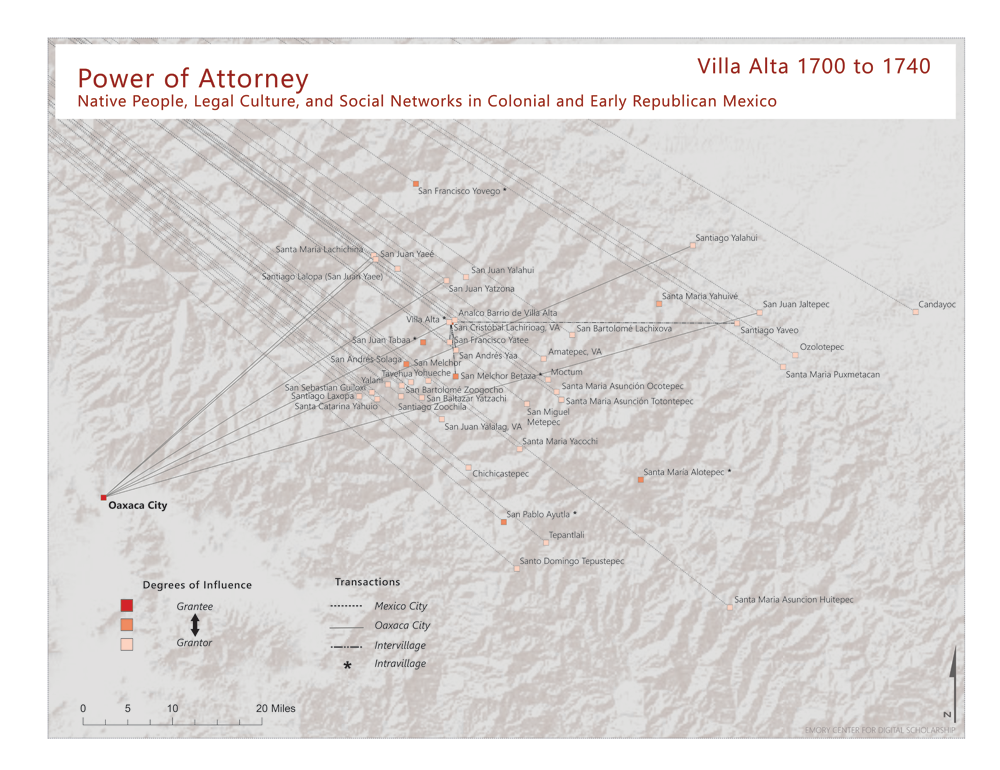 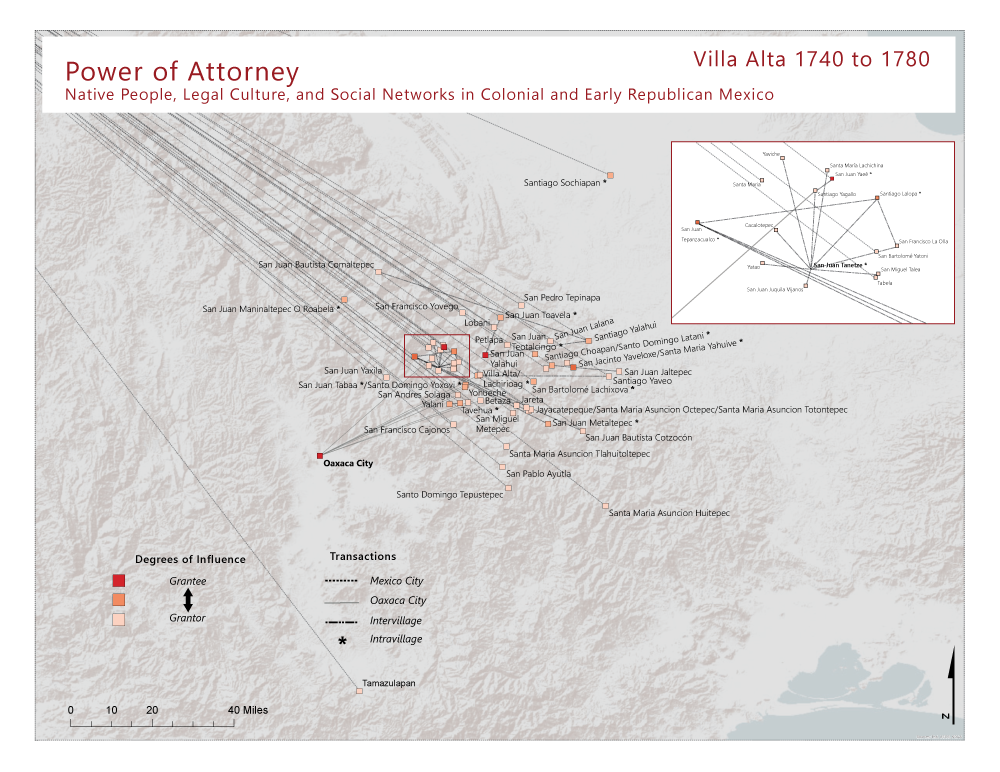 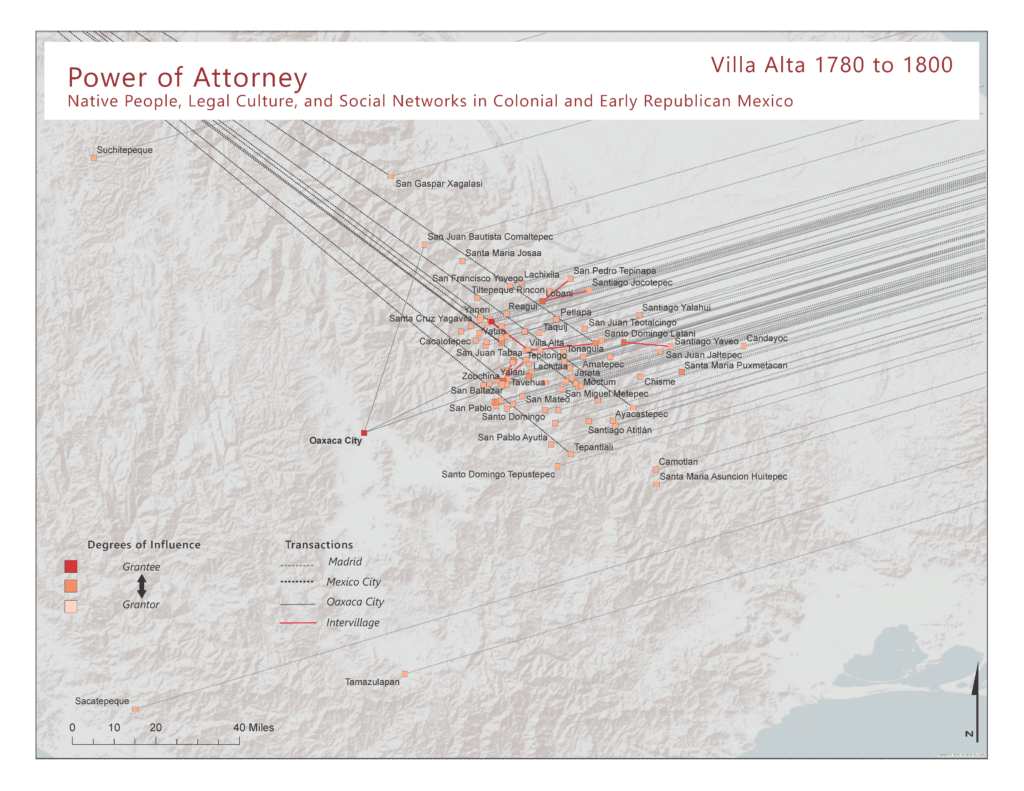 Static PDF maps freeze-frame power of attorney relationships for three periods of time (1700-1740; 1740-1780, and 1780-1800), and provide a detailed look at how power of attorney relationships changed across the three periods.  We divided the century in this way for two reasons.  First, two forty-year blocks allowed for a sufficient sample of letters of attorney with which to assess change over time from 1700-1780.  During the final twenty-year block from 1780-1800, the number of contracts for power of attorney soared, a concentration of activity that could be captured in this shorter time frame.  Second, the periodization corresponds with historical watersheds in the region.  The first period begins with the secularization of parishes that followed a native rebellion in 1700, resulting in a reorganization of church administration and the hierarchical relationships among native towns, as well as greater penetration of Spanish institutions into indigenous communities. The second period begins with a series of epidemics that depressed agricultural production, thereby constraining the material resources of native towns.  The final period coincides with the mature Bourbon Reforms, characterized by fiscal and administrative changes that shaped the region.

The static PDF maps and the Gephi animation show that native people granted power of attorney with greater frequency over the course of the century.  The data culled from the letters of attorney reveal that 74 contracts were granted by indigenous individuals and communities from 1700-1740; 106 from 1741-1780; and 130 from 1780-1800.  Increasing power of attorney likely corresponded with a general uptick in litigation in the Spanish empire through the eighteenth century and with dynamics specific to the Villa Alta region (see History and Geography of Oaxaca).  Power of attorney was also more frequently given to Indians after 1740.  The data reveals that 8 contracts were granted to indigenous legal agents from 1700-1740; 44 from 1740-1780; and 15 from 1780-1800. This trend may correspond with more litigation as well as the secularization of parishes in the district after 1700.  Secularization increased the number of parishes and parish priests in the district, and placed new emphasis on Spanish language education through the presence of maestros de escuela (schoolmasters) who taught the Christian doctrine to native villagers.  Greater exposure to Spanish language and institutions may have equipped more native individuals to serve as legal agents.

CARTO maps allow for analysis of how different factors correlated with power of attorney relationships over the eighteenth century.  The first map contains two layers, which can be activated by clicking on the boxes labeled “Receiving Power” and “Granting Power” in the upper left hand corner of the map.  The yellow circles of the base layer (“Granting Power”) represent all native towns in the district, each of which granted power of attorney at least once during the eighteenth century.  If one hovers over the center of each town with the hand-cursor (not the arrow cursor), a window pops up with the name of the town, and the number of grants of power of attorney made by individuals or groups in the town, and the number of grants received by legal agents residing in the town.  If one turns off the base layer and activates the second layer by clicking on the “Receiving Power” box, violet circles appear representing towns in which legal agents resided who received power of attorney.  Oaxaca City and Mexico City, as well as a few other towns outside the district appear in this layer.  The size of the violet circles corresponds to the frequency with which legal agents in the location received power of attorney.  If one hovers over a circle with the hand-cursor, the name of the town or city appears along with the number of grants of power of attorney given and received.  One can view both layers simultaneously by checking both the “Receiving Power” and “Granting Power” boxes.

The two layers of first CARTO map show that letters of attorney were generated in every town in the district, and that many fewer towns were home to legal agents who received power of attorney.  They also show that indigenous legal agents receiving power of attorney tended to reside in the northwestern region of the district, which was closest to Oaxaca City and the royal highway (Camino Real) to Mexico City.  These are just some of the ways in which a map can tell a story about the relationship between geography and legal culture at a glance, more readily than a chart or table.  In order to refine visual impressions with more specific data, one can hover the hand-cursor over a town, and the name of the town and the number of grants of power of attorney given and received pop up.

The second CARTO map shows the region’s ethnolinguistic divisions and the twenty-two towns that served as parish seats during the eighteenth century (after 1707).  This map differs from the first and third CARTO map in that one can zoom in to see satellite imagery of the region, which allows interaction with the district’s geography and topography. Armed with the information from the first map about grants given and received, one can determine the ethnolinguistic identification of a town, whether a granting or receiving town was a parish seat, and examine the geography of that town.  For example, native individuals residing in Nexitzo Zapotec towns received the most grants of power of attorney, and native individuals residing in the cabeceras — parish seats and administrative centers (and often population centers) — received power of attorney most frequently.

The third CARTO map overlays an ethnolinguistic map of the region on top of a map that provides information about how the population of each town changed over the eighteenth century, with population estimates taken from 1703, 1742, 1781, and 1789.  By clicking on the raindrop icon next to “Filter Population by Year,” the color scheme for the years in which population estimates were taken emerge.  One can then click on each year to see how population changed over time. From 1700-1740, the native population grew from roughly 36, 396 to 49, 000, and more or less leveled off for the remainder of the century.  The CARTO map shows local specificity within this broader demographic trend.  As the order of the colors of the concentric circles representing the towns and their populations make clear, some towns grew and others shrank during the eighteenth century.  For example, the population of towns with purple circles around the outside grew, but towns with yellow circles on the outside shrank, as a result of some combination of factors including disease, agricultural crisis, migration, and changes in the regional economy related to the repartimiento of cochineal dyestuff and cotton textiles. [1]  If one hovers over a town with a cursor, the name of the town and its population for each of the four interval years pop up.  This additional data allows one to correlate population and ethnolinguistic region with frequency of power of attorney granted and received.